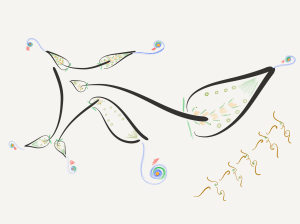 As the magnetic bar spun at several hundred
gyrations or so, it scoured everything on its way,
creating a gigantic crater.
~

The glucose chunks (and two other coloured nutrients)
that were suspended in water were battered head on
with the powerful arms of the bar.
One moment, here they were, circling around like bees around a flower;
and another moment they were sucked deep down in the vortex.
Their valiant efforts to thwart the centrifugal pull and
escape to the periphery were unfruitful.
~

The game continued for a good
ten minutes or so. Eventually,
the glucose chunks dissolved (or simply gave up)
and became one with the water molecules, completely indistinguishable
from one another to our naked eye.
~

One starts off with a transparent and a clear liquid
and ends with a golden yellow concoction that
would be fed to a multitude of hungry yeast cells.
~

Life too starts off with our dreams and aspirations in the
giant cauldron we live in,
much akin to those free floating glucose chunks.
The forces of life strive hard to dissolve
those dreams and aspirations, to remind us
that it is impossible to evade the eventual
dissolution and the Death itself.

Down in that abyss, lie the indistinguishable,
and (un)fulfilled aspirations and dreams, of our
entire consciousness combined.
~